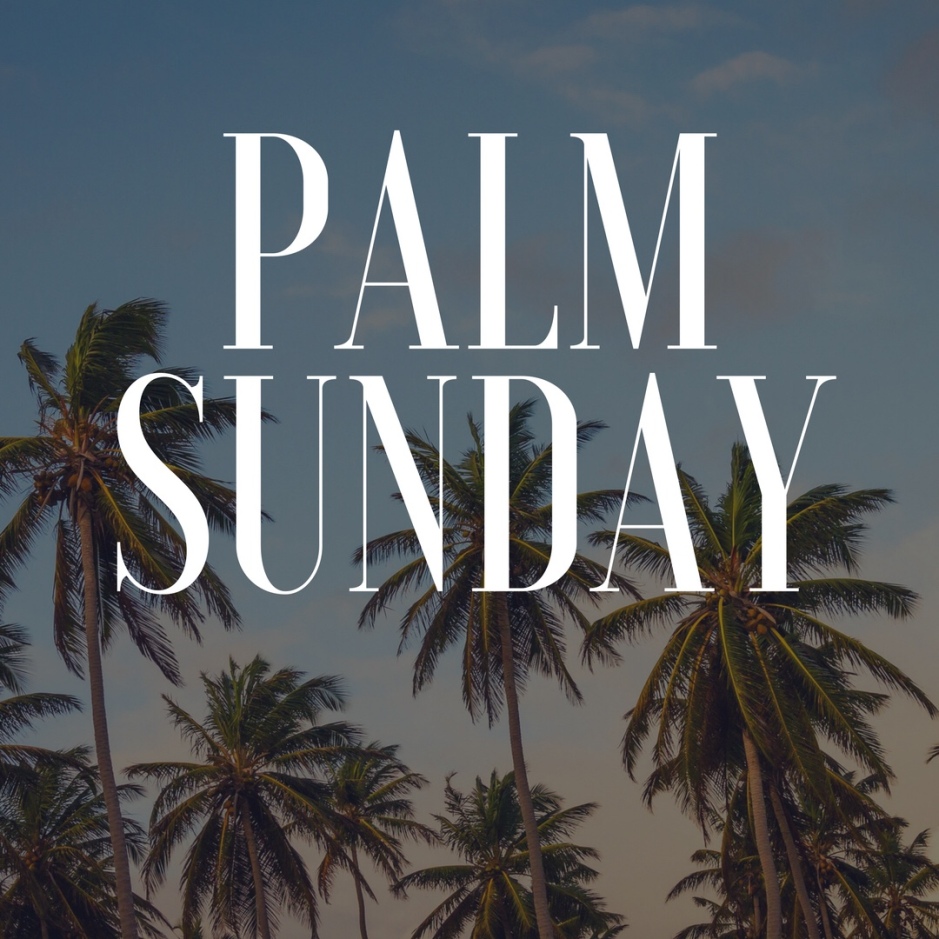 This past sunday, we celebrated Palm Sunday at church. This is always one of my favorite church services. Perhaps my fascination began as a child, excited for the opportunity to get out of my seat and wave a palm branch as we walked into the sanctuary! None the less, my fascination with the tradition has only grown deeper as an adult.

You may be wondering what kind of celebration (or what kind of church) is this? The mention of palms might conjure up tropical images in your mind of flamingos, beaches, and tiki huts. Next thing I know, I will be getting calls from the ladies in my family with concerns about the future of this United Methodist church that I attend!

Just to be clear, Palm Sunday is not code for a luau or beach party!!

Rather, Palm Sunday is a day of celebration as we remember Jesus’ triumphant entry into Jerusalem the Sunday before his death and resurrection. As you may recall, Jesus and his disciples had traveled to Judea, to the city of Jerusalem, for the Passover, also known as the Feast of Unleavened Bread. This annual festival celebrated God’s redemptive acts for His people, as they gathered to remember how God delivered the nation from captivity in Egypt. The captive people were instructed to paint their doorposts with the blood of a sacrificial lamb and make bread without leaven because their deliverance was so imminent that there was no time for the bread to rise. See Exodus 12 for the full story of flat biscuits, boiled lamb, and fleeing from captivity.

Now, please turn your attention to the 30s A.D. Jerusalem was a bustling city in the widespread Roman Empire. It was springtime and unusually crowded with visitors in town for the Passover, the largest and most popular Jewish festival of the year. Among those many travelers were Jesus and his disciples.

HISTORY REMINDER: In Jesus’ day, the Jewish people had been under foreign rulers for the past nearly 600 years! The Jewish people had been scattered in every direction, as the nation had been under the rules of Persia, Greece, and now Rome. The province of Judea [where Jerusalem was located] had been conquered by the Roman Empire in 63 B.C. The local Roman government, unlike some previous rulers, did allow the Jews to practice their faith. Although Roman rule allowed freedom of religion, the Hebrew people were frustrated and tired of the political oppression as well as the financial strain of paying taxes to both Rome and the temple.

The Jewish people were anxious for a native ruler to rise up and regain control of their land. They were constantly looking for a military leader to fulfill the ancient prophecies spoken to their forefathers. The following passage from Matthew’s gospel recounts the events of Jesus’ entry into Jerusalem the week of Passover.

Now when they [Jesus and the disciples] drew near to Jerusalem and came to Bethphage, to the Mount of Olives, then Jesus sent two disciples, saying to them, “Go into the village in front of you, and immediately you will find a donkey tied, and a colt with her. Untie them and bring them to me. If anyone says anything to you, you shall say, ‘The Lord needs them,’ and he will send them at once.”

This took place to fulfill what was spoken by the prophet, saying, “Say to the daughter of Zion, ‘Behold, your king is coming to you, humble, and mounted on a donkey, on a colt, the foal of a beast of burden.’”

The disciples went and did as Jesus had directed them. They brought the donkey and the colt and put on them their cloaks, and he sat on them. Most of the crowd spread their cloaks on the road, and others cut branches from the trees and spread them on the road. And the crowds that went before him and that followed him were shouting, “Hosanna to the Son of David! Blessed is he who comes in the name of the Lord! Hosanna in the highest!” And when he entered Jerusalem, the whole city was stirred up, saying, “Who is this?” And the crowds said, “This is the prophet Jesus, from Nazareth of Galilee.” – Matthew 21:1-11, ESV

Surely, no one expected the long-awaited Hebrew messiah to ride into town on a donkey! Some must have thought: ‘What? This cannot be our promised hero! He has no horse, no armor, no sword!’ Perhaps some recalled the prophet’s words of promise read aloud in the temple or discussed around the dinner table. Perhaps some shared the same feelings of discouragement as those did in the prophet’s day.

The priest Zechariah survived captivity in Babylon before returning to the promised land and years later, serving as a prophet to the Jewish people. His prophecies spoke promise to a discouraged nation, a weary and displaced people, longing for God to faithfully restore the nation of Israel. They felt that God was absent and wondered if He would ever send the messiah He had promised through many a prophet’s tongue.

Hear the Word of the LORD spoken to his prophet Zechariah:

“Rejoice greatly, O daughter of Zion! Shout aloud, O daughter of Jerusalem! Behold, your king is coming to you; righteous and having salvation is he, humble and mounted on a donkey, on a colt, the foal of a donkey.” – Zechariah 9:9, ESV

Fast forward to Friday. The party has not stopped in the holy city. The week has been full of excited buzz and speculation over this Jesus, his actions and his identity.

After his triumphant entry into Jerusalem on Sunday, he returned to the city on Monday:

He [Jesus] went into the temple and began to throw out those who were selling, and he said,“It is written, my house will be a house of prayer, but you have made it a den of thieves!” Every day he was teaching in the temple. The chief priests, the scribes, and the leaders of the people were looking for a way to kill him, but they could not find a way to do it, because all the people were captivated by what they heard. – Luke 19:45-47, CSB

On Thursday, after several days of teaching in the temple, Jesus shared the Passover meal with his disciples:

On the first day of Unleavened Bread the disciples came to Jesus and asked, “Where do you want us to make preparations for you to eat the Passover?” “Go into the city to a certain man,” he said, “and tell him, ‘The Teacher says: My time is near; I am celebrating the Passover at your place with my disciples.’” So the disciples did as Jesus had directed them and prepared the Passover. –          Matthew 26:17-19, CSB

The rest is not only history, but the most important event in everyone’s history. Jesus served as the Passover Lamb for all mankind, putting an end to our sins by overcoming death. On the cross, He paid the final and full price for the sins of the whole world. He overthrew the old temple sacrifice system once and for all and paid our debts in full.

Jesus knew all the events to come when he rode into Jerusalem on that donkey. He fully understood the price that he would have to pay and the sufferings that he would endure, and he did it anyway because his love for the world outweighed all pain and suffering that he would experience. He came to save the world from their sins. He came for me, and he came for you. Now that is truly something to celebrate!

If you want to be a hero well just follow me

@runawaywithme98 (in the world of books)

seeking joy in every season of life

seeking joy in every season of life

A Softer Shade of Red

Just another God tale of Beauty for Ashes...